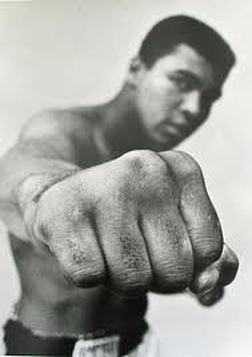 If I ever doubted the power of Muhammad Ali as a cultural icon, it vanished when actor Gregory Hines broke down on the phone with me in 2002 as he recalled the emotional devastation he felt over the fighter's brutal 1971 loss to Joe Frazier. For Hines and millions of others around the globe, the match was about so much more than who walked away with the championship belt at the end of the night. It was intertwined with issues of race, religion, politics, the generation gap, individualism and others tearing at the fabric of society at the time.

This year marks the 40th anniversary of that bout, dubbed "The Fight of the Century," so I thought it would be a good time to revisit my 60th birthday tribute to Ali from The Hollywood Reporter, exploring what made the champ "The Greatest" with noted actors (Michael J. Fox, Kris Kristofferson, Rod Steiger, etc.) authors (George Plimpton, Budd Schulberg, Gay Talese),  TV journalists (Ed Bradley, Bryant Gumbel) and rapper Chuck D.

It wasn't hard getting people to talk about Ali. In fact, I have never encountered celebrities so eager to discuss something other than themselves and their latest project. Most were reached the traditional way, through their press reps; others, I found through the White Pages (Talese, Plimpton). With Schulberg -- the noted sports writer, screenwriter (On the Waterfront, A Face in the Crowd) and novelist (the seminal exploration of  Hollywood venality What Makes Sammy Run?) -- it took several days of scouring the internet and a wrong turn in Florida with the widow of another Budd Schulberg before I finally located him in the small town of Quioque, Long Island.

Many of those I interviewed for the article have since passed away, including Hines (who died of liver cancer in 2003). After battling  Parkinson's Syndrome for more than three decades,  Ali passed away on  June 3, 2016, at the age of 74.