The Longwell Files
(Also check out my 2002 exploration of the history of the "Star Trek" franchise from The Hollywood Reporter, "Still Boldly Going.") 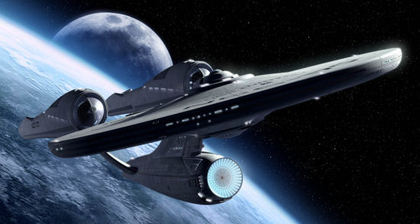 Hell hath no fury like a geek scorned, and there is no species of geek more dedicated or passionate than the Trekkie (or Trekker, as they prefer to be called). Roger Guyett, the visual effects supervisor for Paramount’s “Star Trek” prequel, knows this all too well. “Sometimes I wonder if I’ll meet someone on a dark and stormy night and he’ll come at me with a machete because I didn’t do something the way some hardcore fan would’ve done it,” says Guyett, in a deadpan tone that suggests he’s not quite kidding.

Guyett is not the only one facing this fear. From franchise reboots (“Terminator Salvation”) and sequels (“Transformers: Revenge of the Fallen,” “X-Men Origins: Wolverine”) to adaptations of time-honored classics (“Where the Wild Things Are,” “Watchmen”), many of this year’s visual effects spectaculars have mined preexisting works for inspiration, and each one has its own legion of persnickety hardcore fans.

“Actually, it’s harder to deal with than just starting with a blank slate,” Guyett says. “You have to understand the context of everything you’re doing and everything has to make sense within that world, and that doesn’t mean that you can’t change some things.”

For “Watchmen” director Zack Snyder, there was no question: Dr. Manhattan had displayed full-frontal nudity in the original 1986 DC comic, so the luminescent blue super hero would also bare all in his big-screen adaptation. Warner Bros. reluctantly agreed.

Since actor Billy Crudup’s on-set performance as Dr. Manhattan (carried out clothed in a mocap suit) would be replaced by a CGI figure in post, the job fell to the artists at Sony Imageworks to create an appropriate set of male super hero genitalia. Visual effects supervisor Peter G. Travers submitted 44 candidates, numerically arranged from biggest to smallest. Snyder picked number 22, right in the middle of the size spectrum, and it was thereafter referred to as “the 22.”

“I know there might’ve been some people who were turned off by the fact that it was there,” says John “D.J.” Des Jardin, another of the film’s VFX supervisors, “but my hat is off to Zack for being so pure to the graphic novel that way, because it’s a major development point in the Dr. Manhattan character. He’s starting to lose touch with humanity, so he doesn’t care if he walks around naked all the time.”

It’s a testament to the passion of Trekkers that one of the most delicate issues Guyett faced on “Trek” was alterations to the iconic USS Enterprise. As a child, Guyett liked his toys and models to have moving parts, something the exterior of the original Enterprise lacked. So his team at ILM altered the design of the ship’s navigational deflector (the glowing blue tip on the lower cylinder of the ship) so it could expand and contract, and put doors on the engines that open when it goes into warp speed. At the same time, they mimicked the paneled construction of the original Enterprise and the way that the light reacted to the surface of its dish.

“It’s sort of a combination of trying to pay homage to and take the best of that old world and the best of those concepts and trying to contemporize,” Guyett says. “Generally, if you do something cooler, smarter or more contemporary, I think people will embrace it.”

In “Terminator Salvation,” the really cool piece of machinery visual effects supervisor Charles Gibson was tasked with re-creating had largely been portrayed in previous installments by a human — Arnold Schwarzenegger. In the new film, the cyborg (model number T-800) would be seen primarily in its endoskeleton form — which had previously been brought to life in just a few scenes through a combination of stop-motion animation and puppetry — but Gibson felt it should move like Schwarzenegger nonetheless.

“We saw (the T-800) as a classic movie character, like Spider-Man or the Hulk,” Gibson says. “He’s got a very specific way of moving, and that’s basically Arnold Schwarzenegger playing the part of a cyborg.”

Gibson’s task was made easier by the presence of special makeup effects supervisor John Rosengrant and his crew at Liberty Effects, staffed by veterans of Stan Winston Studios, which helped bring the T-800 to life in previous films. (Winston died in June 2008. The film is dedicated to him.)

“They knew all of the tricks that (James) Cameron (director of the first two installments), Arnold and Stan had gone through to get that performance,” Gibson says, “(such as) the way that Arnold held his body, his chin, this particular kind of walk. And if you look at the film, even though it doesn’t look like Arnold, we feel he kind of plays it like Arnold does.”

Schwarzenegger does make a brief cameo as a CG animation. To re-create his body, Gibson referenced old bodybuilding photos. For his head, he digitally scanned a life cast Winston had made of Schwarzenegger in 1983 for the original “Terminator.”

“That was a great help, but it was only a starting point,” Gibson says. “We spent a lot of time agonizing over why doesn’t this look right. It ended up needing some surprisingly simple adjustments to the face — the way the ears were tilted or making a 16th of an inch move to the eyes and things like that.”

The techniques used to bring the monsters to life in director Spike Jonze’s big-screen adaptation of Maurice Sendak’s 1963 children’s classic “Where the Wild Things Are” are primitive by comparison.

“It was very important to Spike that they were creatures that existed in the aesthetic of the film and not come across as achievements in visual effects, per se,” says Daniel Jeannette, the film’s visual effects supervisor and animation director.

The creatures were portrayed on-set by actors wearing costumes created by the Jim Henson Creature Shop, then, instead of replacing the faces with CGI animation, the VFX team virtually inserted 3D wire frame models under them in post.

“The actual (3D) mesh was used to animate the face, like you would do for any other creature movie,” Jeannette explains. “The big difference here is that nobody created the fur and or lit the faces in a complex kind of way. All that was already photographed. I guess we must’ve done something right with those characters because people talk of them as beings and not as visual effects or animation.”

On rare occasions, the visual effects department can slip something by without notice, even if it involves large-scale changes to a beloved franchise. A case in point: In “Harry Potter and the Half-Blood Prince,” the Quidditch stadium is radically different than it was in previous installments.

“It had always been isolated against the sky and you got no sense of speed,” says visual effects supervisor Tim Burke. “So we introduced this huge waterfall and changed the stadium so that there were more stands, and we raised them up so the players were always flying against a background, so you got speed.”

With the “Potter” franchise, however, it may be a case of the more things change, the more they stay the same.

“We move everything all the time,” Burke admits. “Hogwarts has changed so many times, there are only a few buildings from the original film that still exist.”