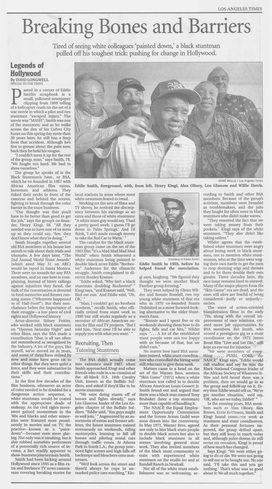 Tired of seeing white colleagues ‘painted down,’ a black stuntman pulled off his toughest trick: pushing for change in Hollywood.

Pasted in a corner of Eddie Smith’s scrapbook is a small, yellowed newspaper clipping telling of a helicopter crash on the set of a war movie in which a pilot and two stuntmen “escaped injury.” The movie was “MASH”; Smith was one of the stuntmen; and as he walks across the den of his Culver City home on this spring day more than 30 years later, he still has a limp from that accident. Although he’s free to grouse about the pain now, back then he held his tongue in check.

The group he speaks of is the Black Stuntmen’s Assn. (BSA), which he co-founded in 1967 with African-American film extras, horsemen and athletes. They risked their collective necks in front of the cameras and behind the scenes, fighting to break to the color barrier in the stunt business.

“Our thought was that you’d have to be better than good to get the job,” says the group’s co-founder Henry Kingi, 58. “All they needed was to have one of us mess up so they could say, ‘See, they don’t know what they’re doing.’”

Smith has brought together several old BSA members at his house last month to talk about their trials and triumphs. A few days later, “The 2nd Annual World Stunt Awards” (which aired May 31st on ABC) would be taped in Santa Monica. There were no awards for any BSA members, and no one here is complaining. Instead of bitter railings against the injustices they faced, the bulk of the conversation is devoted to fond memories and former running mates (“Whatever happened to ol’ half-foot?”). But their nonchalance belies the importance of their struggle -- a lost piece of civil rights and Hollywood history.

Actor-director Sidney Poitier, who worked with black stuntmen on “Uptown Saturday Night” and other films, says the BSA made a contribution “that is all too often not remembered or recognized by the industry. A lot of the guys like myself, we’ve moved on in years, and some of them have retired by now and some have gone on to other things. But they were quite a force, and they were substantive in their skills and their contributions.”

In the first few decades of the film business, whenever an actor of color needed to be doubled for a dangerous action sequence, a white stuntman would simply be coated with the appropriate shade of makeup. As the civil rights movement gained momentum in the ‘60s and blacks and other minorities were featured more prominently in movie and on TV roles, the practice – known as a “paint down” -- became even more glaring. Not only was it insulting, but it also robbed nonwhite performers of a potentially rich source of income, a fact readily apparent to show-business journeyman Smith.

Smith had been kicking around Hollywood since 1955 as a film extra and a freelance TV news cameraman who covering breaking stories for local stations in areas where most white newsmen feared to tread.

Working on the sets of various films and TV shows, he noticed the discrepancy between his earnings as an extra and those of white stuntmen: “A white stunt guy would say, ‘I had a pretty good week. I guess I’ll go down to Palm Springs.’ And I’d think, ‘I ain’t made enough money to take the Red Car to Watts.’”

The catalyst for the black stuntman group came on the set of the 1963 film “It’s a Mad, Mad, Mad, Mad World” when Smith witnessed a white stuntman being painted down to double black actor Eddie “Rochester” Anderson for the climactic struggle. Smith complained to director Stanley Kramer.

“Man, I couldn’t get no brothers nowhere,” recalls Smith, who officially retired from stuntwork in 1996, but still works regularly as a recruiter of African-American extras for film and TV projects. “But I told him, ‘Next time I’ll be able to supply you with what you want.’”

The BSA didn’t actually come into existence until 1967, when Smith approached Kingi and other friends who rode in a re-creation of the all-black U.S. 10th Cavalry Unit, known as The Buffalo Soldiers, and asked if they’d like to be movie stuntmen.

“We were doing stunts off of horses and fights already,” says Len Glascow, leader of the Los Angeles chapter of the Buffalo Soldiers. “Eddie said, ‘You guys might as well join.’” Augmented by an assortment of extras and former athletes, the future stuntmen trained strenuously on weekends, riding motorcycles, learning to fall off horses and piloting rental cars through traffic cones. At Athens Park in South L.A., the group would practice fight scenes and do high falls off backstops and bleachers on to mattresses.

“We’d look across the street and there’d always be cops in unmarked police cars watching,” Kingi says, laughing. “We figured they thought we were another Black Panther group forming.”


They were helped by Glenn Wilder and Ronnie Rondell, two of the top young white stuntmen of era who in 1970 co-founded Stunts Unlimited as a more forward-looking alternative to the older Stuntmen’s Assn.

“Ronnie and I spent five or six weekends showing them how to do fights, falls and car hits,” Wilder says. “…A lot of the established stunt people were not too happy with us because of that, but we didn’t care.”

No matter how hard BSA members trained, some white stunt coordinators who controlled the hiring were still reluctant to give them work.

Matters came to a head on the set of the Warner Bros. Western “Skin Game” (1971) when a white stuntman was called in to double African-American star Louis Gossett Jr. Smith found out and argued that there was a black man named Tony Brubaker (later a top stuntman) more than capable of handling it.

The NAACP, the Equal Employment Opportunity Commission and the Screen Actors Guild were soon drawn into the controversy. In May of 1971, Warner Bros. agreed not only to hire black stunt people to double black actors but also to include black stuntmen in all scenes involving general stunt work. They also invited members of the black stunt community to train with experienced white stuntmen on the studio lot and at Randall Ranch in Newhall.

Not all of he white stunt establishment was so welcoming, accord to Smith and other BSA members. Because of the group’s activism, members were branded troublemakers, and the jobs they fought for often went to black stuntmen who didn’t make waves.

“They resented the fact that we were taking money from their pockets,” Kingi says of the white stuntmen. “They also didn’t like taking orders.”


Wilder agrees that the established white stuntmen were angry about losing work to black stuntmen, not to mention white stuntwomen, who at the time were waging their own battle to get the men to stop donning wigs and dresses and to let them double their own gender. Three decades later, the race issue remains hard to unravel. Many of the major players from the era and the “Skin Game” controversy itself (including Brown) are deceased, and the ones still alive are fearful of being considered – justly or unjustly – racists.

The wave of action-oriented “blaxploitaton” films in the early ‘70s, along with the overall of improvement of race relations, created more job opportunities for BSA members. But Smith, who scored a prestigious gig as a stunt coordinator on the 1973 James Bond film “Live and Let Die,” still kept an eye out for any injustice.

“We were members of everything... PUSH, CORE, the NAACP,” Kingi says. “Eddie would call studios and say he was the Black National Congress leader of the African Society of Whatever-It-Was and he’d heard there was a problem, then we would go in as the group and follow up on it. Every time Eddie would tell us, ‘We’ve got another situation,’ we’d say, ‘Okay, who are we today, Eddie?’”

In the ensuing years, BSA members such as Alan Oliney, Alex Brown, Ernie Robinson, Smith and Kingi found consistent work as stuntmen and stunt coordinators. As their personal fortunes improved, the group drifted apart, but they still keep in touch today and, although paint-downs still do occur on occasion, Kingi is proud of how much has changed.

Says Kingi: “We were either going to do or die. We were not going to sell out or be bought out. No one said, ‘I’ll take this and you get nothing.’ That’s what was so good about it: We all stuck together.”