In the grand tradition of Richard Nixon, just let me make one thing perfectly clear: This piece is intended to satirize homophobic attitudes, not promote or endorse them.

Shortly after this piece was published, an assistant for a conservative gay radio host left me a phone message asking if I could provide him with a contact for the subject of the article, Rev. Harvey Polstom, unaware that the man, the article and virtually everything that appeared in the Weekly World News were works of fiction. I left a message for him explaining this, and I never heard back. 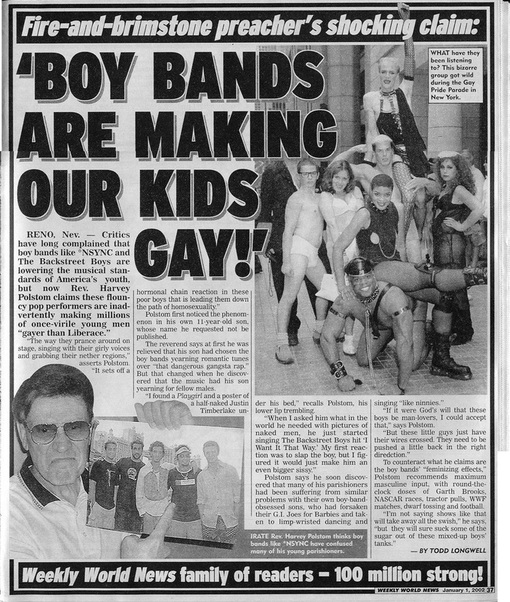 The way they prance around on stage, singing with their girly voices and grabbing their nether regions," asserts Polstom. "It sets off a hormonal chain reaction in these poor boys that is leading them down the path of homosexuality."

Polstom first noticed the phenomenon in his own 11-year-old son, whose name he requested not be published.

The reverend says at first he was relieved that his son had chosen the boy bands yearning romantic tunes over "that dangerous gangsta rap." But that changed when he discovered that the music had his son yearning for fellow males.

"I found a Playgirl and a poster of a half-naked Justin Timberlake under his bed," recalls Polstom, his lower lip trembling.

"When I asked him what in the world he needed with pictures of naked men, he just started singing The Backstreet Boys hit 'I Want It That Way.' My first reaction was to slap the boy, but I figured it would just make him an even bigger sissy."

Polstom says he soon discovered that many of his parishioners had been suffering from similar problems with their own boy-band-obsessed sons, who had forsaken their G.I. Joes for Barbies and taken to limp-wristed dancing and singing "like ninnies."

"If it were God's will that these boys be man-lovers, I could accept that," says Polstom.

"But these little guys just have their wires crossed. They need to be pushed a little back in the right direction."

"I'm not saying shows like that will take away all the swish," he says, "but they will sure suck some of the sugar out of these mixed-up boys' tanks."