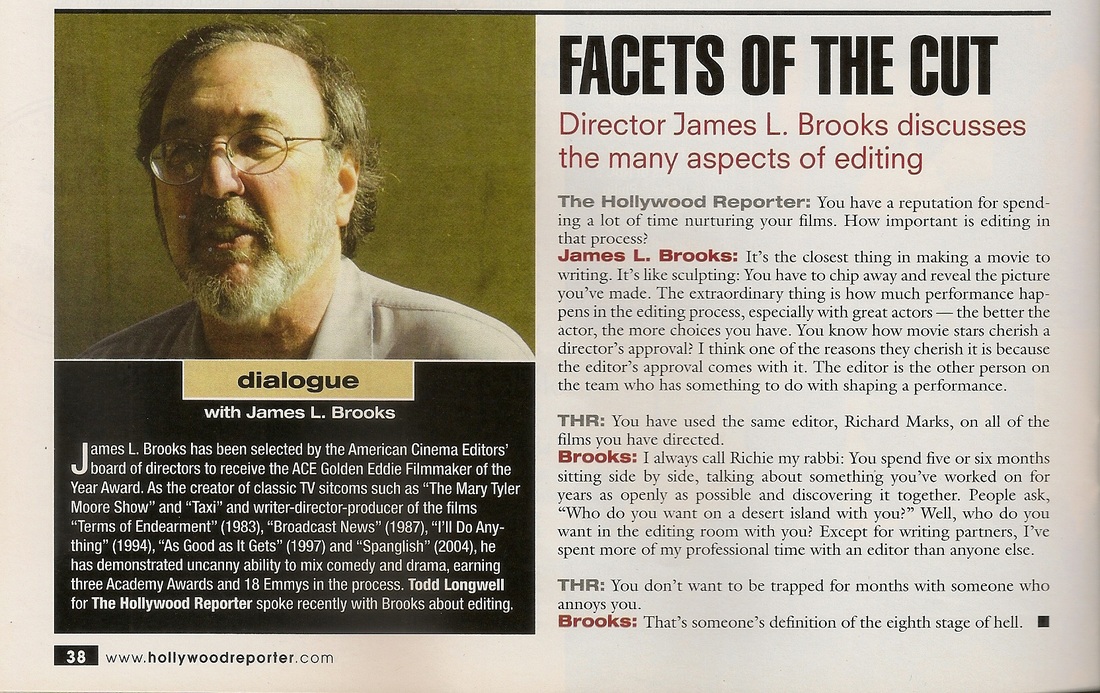 _Below is the balance of my Jan. 2005 interview with Brooks, previously unpublished.


You're one of the only filmmakers who has used editing as a major plot point.

How’s it feel to get honored by an editing society?

You know how movie stars cherish a director’s approval. I think one of the reasons they cherish it is because the editor’s approval comes with it. The editor is the other person on the team who has something to do with shaping a performance.

Can you think of a particular scene where editing saved it?

It’s just that some have been more difficult than you could imagine. The sweating scene in “Broadcast News” was for some reason incredibly hard. We spent more time editing that than any other scene. You can never predict what will turn out to be difficult in the end.

Was it making space for the laughs?

No. It was getting the laughs. To crack that scene so it played funny was, for reasons I don’t remember. But I can’t tell you… More man hours went into that scene than almost anything I’ve ever done. Sometimes it’s finding a shot and just going over it, especially in those days. That was a surprise. Jokes based on timing being everything, well, timing is the editing process.

I think it is where it happens. Everybody knows that you can come out being thrilled by dailies and just flying, and then that it’s never in the picture. Context is everything, and you create the context in the editing room.


The superstition is the great dailies make for a bad finished film, which I can’t believe is true.

The point that’s trying to make is true, the phrase isn’t. Terrible dailies make for a terrible film.