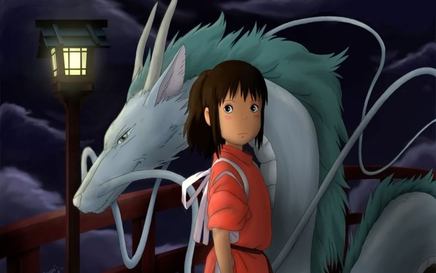 Hayao Miyazaki's "Spirited Away."
Clash of the Titans
The animated feature race heats up

Last month, the Academy of Motion Picture Arts and Sciences announced that 17 films are in contention this year for what likely will be five nomination slots, creating a veritable stampede of hand-drawn and CGI-animated orphans, aliens, horses, rodents, birds, woolly mammoths and, yes, vegetables vying to win the attention of Oscar voters.

"I think this year is a real race" says Leonard Maltin, film critic on the syndicated TV program "Entertainment Tonight," host of TV's "Hot Ticket" and author of "Of Mice and Magic: A History of American Animated Cartoons." "There's such diversity this year — both quality and diversity."

Notes DreamWorks chief Jeffrey Katzenberg, a producer on "Shrek" and on this year's contender "Spirit: Stallion of the Cimarron": "When you look at the field of animated movies, I think that the work that's being done is outstanding. Frankly, I think the Academy is going to have its hands full this year." 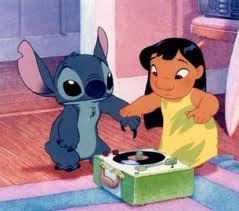 Despite DreamWorks' inaugural Oscar win in the animated feature category, the Walt Disney Co. remains the undisputed king of feature animation — and this year, the studio boasts three serious contenders: "Lilo & Stitch," "Spirited Away" and "Treasure Planet," with "Lilo" the odds-on favorite to take the statuette."

'Lilo & Stitch' has this really exquisite piece of character development and animation with the character of Lilo that is evocative of what Disney does better than anybody (else)," Maltin says. "And, of course, (the character's lead animator) Andreas Deja is one of the masters."

"Lilo," the touching tale of a lonely Hawaiian girl who teaches a stranded alien designed to destroy the meaning of family, is a rousing artistic triumph — not to mention a boxoffice success. But as is often the case, the story behind the story pushes "Lilo" to the front of the Oscar pack. Like the film's pint-sized protagonists, "Lilo" was an underdog: Co-written and co-directed by Chris Sanders and Dean DeBlois, the movie was made at Disney Studios in Orlando — away from the prying eyes of executives and the animation community at large — using old-fashioned stop-motion animation (with no computer-generated imagery) and watercolor backgrounds, the latter of which had not been used on the big screen since the 1940s.

"It was coming from Chris and Dean's original idea, and nothing really changed because they not only directed the film, they also co-wrote it — and Chris did Stitch's voice," producer Clark Spencer says. "When we were in production, people on the Internet would say, 'This is what I heard, but I can't believe this is actually the movie that is getting made,' because it felt so different than anything else."

"Planet" was supposed to be Disney's big animated feature of 2002, but the studio's dreams of Oscar gold and merchandising megabucks were sunk by mediocre reviews and an opening so disappointing that the company cited the film in a $47 million write-down of its previously reported fiscal 2002 earnings.

"I thought that it was entertaining," Maltin says of "Planet," which cost $140 million, nearly twice as much as "Lilo." "Certainly not their best, which people have been eager to point out, but we should all have such 'losers.'"

"Spirited," from legendary animé master Hayao Miyazaki (the 1999 U.S. release "Princess Mononoke"), has been a brighter spot for the studio. Although the film had earned only $5.3 million domestically as of Dec. 22, it is a massive hit in its native Japan and has garnered numerous honors, including the 2002 Berlin International Film Festival's Golden Bear and the National Board of Review's best animated feature prize.

"Miyazaki is in a class by himself," Maltin says. "His film is so utterly different than anything else in the field — certainly in the American field. It's a grand achievement and worthy of all the praise it's been getting."

In stark contrast to the studio's jokey "Shrek," DreamWorks' 2002 effort "Spirit" is a serious piece of animated art that relies on visuals to tell its story, with a negligible amount of dialogue from its human characters and spare narration from the lead horse (voiced by Matt Damon)."I thought 'Spirit' was a really impressive film," Maltin says. "It was a physically be autiful movie, and I was really heartened by the use of character animation in it, that so much of it was pantomimed and handled so well. I was also pleased that they chose to limit the amount of narration in the 'talking animal era' in which we live; I thought that showed tremendous restraint."Katzenberg adds: "Some of the best animated movies ever were fables told through creatures. I think our animation staff has now really grown into a world-class crew and one that was up to the challenge of animating horses — which, if you talk to animators, is the single most difficult creature on this planet." 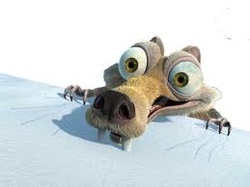 Fox's past efforts to make a mark in animation have ranged from the disappointing (1997's "Anastasia") to the disastrous (1994's "The Pagemaster," 2000's"Titan A.E."), but the distributor finally scored in 2002 with Blue Sky Studios' CG-animated "Ice Age," the year's highest-grossing animated feature."

'Ice Age' sort of took some people by surprise," Maltin says. "I think it's a really good movie, both as sheer entertainment and in terms of the physical achievement. I like the fact that it doesn't look or feel like anyone else's CGI film, and I just love John Leguizamo's (voice) performance."

The surprisingly touching $60 million prehistoric comedy is the first full-length movie for the crew at upstate New York-based Blue Sky, a late-1990s Fox acquisition led by the film's co-writer/co-director Chris Wedge, who won a 1999 Oscar for his animated short "Bunny."

"In many ways, we were 'the little engine that could' because we made this film with far fewer crew members and significantly less money and time than all of our competitors," says Chris Meledandri, Fox Animation Studios president and "Ice Age" executive producer. "And I think that the limitations the picture had truly were turned into a creative asset."
SONY

Although the studio's Adam Sandler effort "Eight Crazy Nights" is technically a contender, Sony's only realistic hope for Oscar recognition in the animated feature category is "Stuart Little 2." Although the latter is a mix of live-action and CGI, the Academy judged that animation figured in 75% of the film's running time, making it eligible for consideration by category rules.

"In terms of its animation, it's absolutely extraordinary because it's a seamless combination of live-action and animation," Maltin says.

But that seamlessness also has proved a problem. "People forget that it's animated," says Lucy Fisher, who produced "Stuart 2" with her husband and Red Wagon Prods. partner, Douglas Wick. "That's the good news and the bad news: Stuart has so much humanity that people forgot he was the fabrication of a computer."
PARAMOUNT

No one expects "Hey Arnold! The Movie" to be mentioned at the Kodak Theatre in March, but Paramount's other Nickelodeon TV spinoff, "The Wild Thornberrys Movie," is shaping up to be a dark-horse Oscar candidate."

'Wild Thornberrys' was a very pleasant surprise," Maltin says. "It's a very entertaining movie, and it's very well-done."

"One of the things that differentiates it is its incredible pro-animal message," says Albie Hecht, Nickelodeon president of film and TV entertainment and an executive producer on "Thornberrys." "Kids love animals, families love animals, and I think it really helps them connect to this movie on another level that almost nobody else has done this year in animation."
ARTISAN

Perhaps the most overlooked animated feature of 2002 has been Artisan's "Jonah: A VeggieTales Movie" from Big Idea Prods., a Chicago-based outfit that aims to create entertainment that passes on biblical values to children. Although the tale of talking, singing, CG-animated vegetables that encounter a man named Jonah — who is assigned to deliver a missive from God — avoids hitting audiences too squarely on the head with its message, its religious orientation might turn off more secular- minded Academy voters.

Most observers agree that if, as expected, the Academy nominates five films in the animated feature category, "Lilo," "Spirit," "Spirited" and "Ice Age" are sure bets, with "Stuart 2," "Planet" and perhaps "Thornberrys" battling for the final slot. Although the race is supposed to be about art — not "hugability" and budget — the more outlandish (Apollo's "Mutant Aliens") and obscure (Spain's "El Bosque Animado") contenders do not figure to stand much of a chance.

But veteran publicist Tony Angellotti, who is crafting Oscar campaigns for Disney's animated features, believes that pundits should prognosticate with caution.

"With only one year under our belt in this category, it's impossible to determine anything such as taste, preferences of style or credibility of predictions," he says. "In other words, nobody knows nothin'."