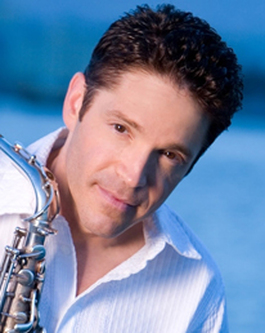 When saxophonist Dave Koz is presented with his star on the Hollywood Walk of Fame Tuesday, it will be in honor of his accomplishments as one of the defining artists of the "smooth jazz" movement. But while on one level he's still all about the music, he's also a virtual one-man conglomerate, with two national radio shows, his own line of wines and even a Dave Koz-branded ocean cruise, as The Hollywood Reporter's Todd Longwell recently found out.

The Hollywood Reporter: What do you think the little Dave Koz growing up in Encino, Calif., back in the '70s would think of your career today?

Dave Koz: I was an awkward kid growing up in the Valley, and music in a way became my best friend through the saxophone, which I picked up at age 13. The sax became that voice that I was able to express myself with. Playing in my brother's band and doing fraternity parties and bar mitzvahs and stuff like that, it never dawned on me that it was possible to make it a career.

THR: You recently ended 20-year stint with Capitol Records and signed with Concord Records. Do you plan on trying anything different with your first album for the label?

Koz: I'm still in the writing mode right now, but I think that this will be original music. I did have a "Greatest Hits" CD last year that had about four brand new songs on it, but as far as a full album of original music, I haven't done that in about three or four years. What I do know is that it will be a largely live musicians album. We have the benefit of living in Los Angeles, where some of the best musicians in the world live and work everyday, so my dream is to put together an incredible group of musicians, go in the studio and record some music.

THR: What has it been like headlining your own ocean cruises?

Koz: Those have been a tremendous amount of fun. About five years ago, they came to me and said, "Would you like to do this?" and the only image I had of a cruise was this horrible weekend cruise I took with my family when I was 13. I was like, "Oh, I don't know." But they just kept after me, and finally I relented and it was magic, because you have 1,800 people on that ship and they're all there for the same reason. We have our fifth cruise coming up in January.

THR: You seem like a nice Valley boy, but is there a dark side to Dave Koz? Any shocking secrets?

Koz: Well, I do crosswords in pen and I often fall asleep doing them in bed and wake up in a pool of ink. It happened last week. I was staying at a friend's house up in the Bay Area while he was out of town. He's a real stylish dude. I woke up in a pool of ink all over his natural white linen sheets, then I had to get a new set and I found that they were $1,400! So that was a little bit of a wake-up call. But I'm still doing them in pen.