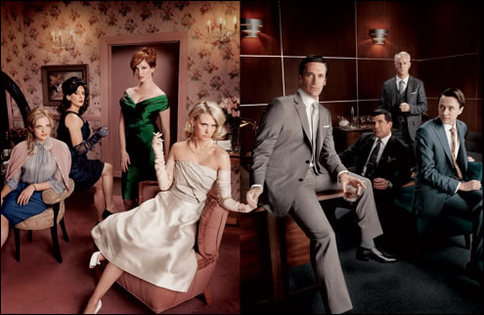 
Over the years, Emmy organizers have displayed a commendable willingness to add and subtract categories and alter their rules as the medium and its technologies have changed.

The upside is that this has allowed a wide variety of TV craftspeople to be honored for their work. The downside is that it has created an unwieldy tangle of categories, nearly as complex and mercurial as the U.S. tax code, with anywhere from three to seven awards for each crafts discipline operating under a variety of different voting formulas. (In contrast, the Oscars have a total of eight crafts awards.)

Here are some of the categories to watch for when the creative arts portion of the Primetime Emmys are handed out by the Academy of Televisions Arts & Sciences on September 12.

Emmy voters are staring at a clash of styles in the multicamera series category, where three sitcoms (CBS' "The Big Bang Theory," "How I Met Your Mother" and "The New Adventures of Old Christine") are competing against the Fox reality show "Hell's Kitchen" and NBC's "Saturday Night Live," both of which would seem to be a better fit for the variety, music or nonfiction programing category.

Do they belong together?

"We do on the average between six and 12 sets a week on a constant repeating basis, which is similar to a 'Saturday Night Live,'" says Steve Olson, production designer of "How I Met Your Mother," which has won the past three years. Whereas with "Hell's Kitchen," the "whole challenge is in the big buildout at the beginning."

The same rules apply to the single-camera series category, where last year AMC's "Mad Men" won for the retro design of its pilot episode, beating, among others, ABC's "Pushing Daisies" and NBC's "Heroes." All three are nominated again this year, along with HBO's modern-day vampire saga "True Blood" and Showtime's "The Tudors." As a freshman series with critical heat, "True Blood" would seem to hold the advantage, but contemporary shows tend not to do well in this category, while historical pieces -- like "Rome," which won in 2006 and 2007 -- do. Advantage: "Mad Men" and "The Tudors."

Last year, the multicamera and single-camera series cinematography categories were eliminated and replaced with awards for half-hour and one-hour series. It's difficult to cite precedent when a category is only in its second year, but it's safe bet that in the half-hour category the stylistic daring of the single-camera shows nominated (Showtime's "Californication" and "Weeds," the CW's "Everybody Hates Chris" and NBC's "30 Rock") is likely to appeal more to voters than the work in a stage-bound single-camera sitcom such as ABC's "According to Jim," which has three previous nominations and no wins. Last year's winner, "Californication," has the visual punch and the critical cred to repeat again, but the edgy work on "Everybody Hates Chris" makes it a dark-horse contender.

In the one-hour category, last year's winner "Mad Men" will again be competing against fellow AMC series "Breaking Bad," along with CBS' "CSI: Crime Scene Investigation," ABC's "Life on Mars" and Showtime's "The Tudors." While the visual style of "CSI" was groundbreaking when it debuted, it's going to be hard for voters to get excited about it as the show approaches its 10th season, no matter how impressive the work. Conversely, the canceled "Life on Mars" is likely to fall victim to the out-of-sight, out-of-mind syndrome.

Things are uncharacteristically streamlined in the Emmy rag trade, with just one umbrella category for series. (There are also separate awards for miniseries, movie or special and variety/music or special). Four out of five of the 2008 nominees in the series category are in contention again this year -- "Mad Men," "Pushing Daisies," "Ugly Betty" and "The Tudors," with the final spot filled by HBO's "The No. 1 Ladies Detective Agency." As with art direction, period pieces tend to prevail over contemporary work. "The Tudors" has won two years running (before that, it was "Rome" and "Deadwood"), so it could be that "Mad Men" takes a turn at the podium this year, unless the off-the-wall creations in "Pushing Daisies" manage to inspire a departure from the traditional paradigm.

Overall, "Mad Men" is an Emmy powerhouse, with 16 nominations, but the show's subtle dramatics make it an underdog here, where it competes in the drama series category with Syfy's "Battlestar Galactica," Fox's "24," ABC's "Lost" and last year's winner "Breaking Bad," all of which provide ample opportunity for the quick-cut razzle dazzle. Fortunately for editor Cindy Mollo, her nominated episode of "Mad Men" ("Maidenform") provided her with several "look at me" scenes, including one set in strip club.

"I don't know if I'd call it flashy," Mollo says, "but there was some editing that had to call attention to itself because you wanted to work in all those moments that made that scene unique to that time period," like the men's quaintly over-the-top enthusiasm for the stripper's final reveal.

In the comedy series category, the cinema verite-style cutting of NBC's "The Office" calls attention to itself loudly, which helps explain why it occupies three of the five nomination slots. (In editing, as with most Emmy categories, individual episodes are judged, not entire seasons.) Of course, that could reduce the number of votes for individual "Office" episodes, leaving the door open for fellow nominees "How I Met Your Mother" and "30 Rock" to take the prize.

From 1986-2007, TV series had a single hairstyling award. Last year, it was split into two categories -- single-camera and multicamera series or special. "Mad Men" won the former; "Saturday Night Live" the latter.

This year, nominees in the single-camera category can be divided into the wacky ("Pushing Daisies" and Showtime's "Tracey Ullman's State of the Union"), the glamorous (ABC's "Desperate Housewives") and serious period pieces ("Mad Men" and "The Tudors"). It's not as definite as a royal flush beats a pair, but a serious period piece is a safe bet to edge out the glamorous and trounce the wacky, as demonstrated by the list of recent series category winners -- "Rome" (2006 and 2007) and "Deadwood" (2005).

In the multicamera series or special category, there are just four nominees. Two are sketch comedy shows, Fox's "MadTV" and NBC's "Saturday Night Live," which give hairstylists the opportunity to wow with a multitude of different character coiffures. They're good bets to garner more votes than the lone nominated sitcom, CBS' "Two and a Half Men," which offers a narrow range for follicle expression, but they will face stiff competition from ABC's "Dancing With the Stars," a top-rated show, airing in primetime, which showcases glamorous and flashy 'do's that must hold up under rigorous physical movement.

The most exciting category here is prosthetic makeup for a series, miniseries, movie or special, where makeup is used to radically transform an actor's appearance. Based on uniqueness and apparent level of difficulty, the top contenders are probably "CSI," where the investigators visit a sci-fi convention packed with creature makeups; FX's "Nip/Tuck," where doctors treat a man covered with viral warts that grow like stalks from his body; and ABC's "Grey's Anatomy," in which a patient receives a face transplant. HBO's "Grey Gardens," in which stars Drew Barrymore and Jessica Lange are shown aging 30 years, is also a strong contender. Other nominees include HBO's "Little Britain USA," featuring a faux nude scene with actors in prosthetic bodybuilder body suits; and "State of the Union," where star Ullman is transformed into a variety of different characters. It's an Area Award, so all or none could end up winning, though the latter scenario is highly unlikely.

In the nonprosthetic categories, the work is much more subtle, making winners harder to gauge. "Grey's Anatomy," "Little Britain USA" and "Nip/Tuck" are all nominated again for makeup for a single-camera series (nonprosthetic), along with "Mad Men" and "Pushing Daisies." "Mad Men" can be given a slight edge here, given its period setting and proven popularity with Emmy voters, but the makeup for a multicamera series or special (nonprosthetic) category -- where sketch comedy ("MadTV" and "Saturday Night Live") dukes it out with dance ("Dancing With the Stars" and Fox's "So You Think You Can Dance") -- is a virtual toss-up.

Like costumes, sound editing has a single category for episodic series. The nominees include "CSI," whose supervising sound editor Mace J. Matiosian has won a total of seven Emmys (one for "CSI"), which can either be seen as a positive (they really like him!) or a negative (he's had enough). The same yardstick can be applied to the supervising sound editors of other nominated shows -- Michael E. Lawshe has won three Emmys, all for the CW's "Smallville," and William Dotson, who has won two for Fox's "24." On the other hand, Daniel Colman and Jon Ibrahim Mete, the respective supervising sound editors for Syfy's "Battlestar Galactica" and Fox's "Terminator: The Sarah Connor Chronicles," are Emmy-less. Of course, they're simply the leaders of the show's nominated sound teams, which number up to 10 people, but it's as good an Emmy gauge as any.

Re-recording sound mixer John W. Cook says, whether it's the Emmys or the Academy Awards, when it comes to sound mixing, "the big flashy stuff seems to get the attention, which I think is too bad, because the subtle stuff requires as much craft as the big loud stuff."

Cook should know -- he won an Emmy in 2007 for his work on an episode of NBC's "Scrubs" titled "My Musical" that wowed 'em with wall-to-wall singing and dancing. This year, he's part of a team nominated for two awards in the sound mixing for a comedy or drama series (half-hour) and animation category for their relatively more subtle work on "Scrubs" and "The Office." Unfortunately for Cook and company, the remaining nominees were given a lot of sonic flash to work with. One mixes comedy and music (HBO's "Flight of the Conchords"), one climaxes with an all-star telethon sing-along (NBC's "30 Rock"), and the other features helicopters (HBO's "Entourage"), which present the opportunity for dramatic surround effects. Again, this is an Area Award, so there could be more than one winner.

The real whiz-bang noise is in the sound mixing for a comedy or drama series (one hour) category, where action heavy-series "24," "Battlestar Galactica" and last year's winner "Lost" have a decided tactical advantage over the ABC dramedy "Boston Legal" and the Fox medical procedural "House."

Nothing is a better showcase for CGI artistry than a sci-fi space opera, which helps explain why "Battlestar Galactica" has won the special visual effects for a series award two years running. This year, the show is up against some stiff competition with eye-popping VFX highlights, including a collapsing CGI city in "Heroes," a visit to a virtual Internet world in CBS' "Ghost Whisperer," dissolving people in Fox's "Fringe," and a menagerie of virtual mutants in Syfy's "Sanctuary." "Heroes" has two previous nominations and no wins, so it might be its turn this year, but the sheer amount of green screen work in "Ghost Whisper" makes it a strong dark horse contender.