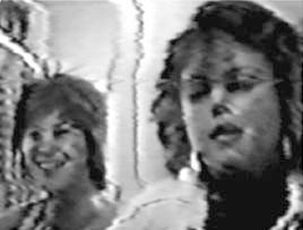 Yes, kiddies, there was a time not so long ago before every cell phone came equipped with a camera -- indeed, before cell phones even existed -- when video recording devices were still big, bulky and analog, and celebrity sex tapes were a brand new phenomenon.

For those too young to remember, the first celeb sex tape to make a splash was a grainy document of a hotel room foursome starring erstwhile Brat Packer Rob Lowe. At the time, I was fresh out of college, writing for the underground movie magazine Film Threat. Several months after the Lowe tape surfaced, Film Threat editor Chris Gore came into possession of a sex tape purportedly featuring the all-girl rock band The Go-Go's. It turned out that no Go-Go's could be seen having sex on the tape, unless one counts a band member going Abu Ghraib on a drug-gorked roadie's privates. In fact, while there is a shocking attempt to coerce a female groupie into servicing the gorked roadie, there's no sex on the tape, period, save for the roadie's pathetic attempts at self-stimulation. But it was novel enough at the time that we felt compelled to share our find with the world, and since internet video streaming was not even a gleam in Al Gore's eye yet, it was decided that I would write an article describing the tape's contents.

Paranoid about the effect the article might have on my budding career, I decided to use a pseudonym. Isn't it ironic -- or even pathetic -- that all these years later I'm eager to claim credit? What can I say? I really like the intro. I'm not including the rest of the article because my elder daughter will undoubtedly be perusing this site, and her innocence is already being compromised enough by news reports on the latest shenanigans of Justin Bieber, Lindsay Lohan, et al.

By the way, if you're looking for a copy of the tape, don't ask me. I didn't own one then (it was a loaner), and I don't have one now.