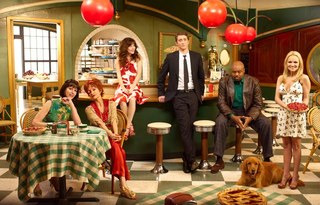 This season's hot look in television art direction is bright, bold and sassy. Production designers are taking advantage of the eye-popping clarity of HD broadcast and treating viewers to surreal looks that push the boundaries of creativity and good taste.

At the forefront of the trend is the ABC comedy "Ugly Betty," a show so visually outre that at times Fox's "The Simpsons" pales by comparison. "I've had people come up to me from the television community and say, 'You have set a precedent that now allows us to go to producers and directors and say, "No, we don't have to do the same old boring thing. We can actually push this a little further and it'll be OK,"'" says the show's production designer, Mark Worthington.

For the Manhattan offices of the fictional fashion magazine Mode, where frumpy fish out of water Betty (America Ferrera) works, Worthington drew on contemporary Dutch, Japanese and German architecture to create a flowing hypermodern space with bluish-white walls, glass partitions, circular archways and skylights, highlighted by bold splashes of orange, blue and green in the carpets, set dressings and "Jetsons"-style furniture.

It stands in stark contrast to Betty's family home in Queens: an earthy, working-class environment with warm, nurturing reds, yellows and ambers and tacky, riotous patterns. "I may be flattering myself, but I think the colors help add to our ability to have strong comic moments for somewhat over-the-top narratives," Worthington says. "The set starts to inform how people act on it."

On ABC's "Pushing Daisies," it's the surreal nature of the narrative -- about a man (Lee Pace) whose touch can temporarily bring people back from the dead -- that gives production designer Michael Wylie and his to team license to explore the outer bounds of reality and taste on sets such as The Pie Hole, a pie shop with giant fake cherries hanging from the ceiling, topped by a faux crust roof with a suggestive slit in the middle. "We sit in the office, and we sort of giggle, and we throw stuff together that on another show we wouldn't be allowed to do," Wylie says. "If it looks good, we go with it, even if it's a traditionally bad design choice. In one of the episodes, we created this candy store that was this Tiffany-box blue color and orange and gold and black and a bunch of things that I would never in a million years throw together in one room."

Even gritty police procedurals such as CBS' "CSI: Miami" have adopted intense, color-rich looks. On that show, however, the sets themselves are typically devoid of color, with off-white walls and glass partitions that serve as a stage for its palette of oranges, ambers and greens to play out in the wardrobe, the set dressing and the lighting. "Almost every set that we create is designed to be shot with a superlong lens, so you can capture bits of color out of focus in the foreground or out of focus in the background, keeping the action in focus in the middle," says production designer Carey Meyer, who formulated the visual aesthetic in collaboration with cinematographer Eagle Egilsson.

One example is a three-room office suite he created for an episode titled "Guerillas in the Mist," which aired in December. "The foreground room is a glass office, the middle room has a long conference table where all the action takes place, then behind it is another room on a platform where all the key light is coming from," explains Meyer, who also directed the episode. "In the long-lens masters of the sequence, the camera is looking through the glass in the foreground, so you're getting all those soft reflected foreground (color) tones. And you can easily control your color, because when you create that much distance between your background and your foreground, the colored light is not contaminating your middle ground."

Ironically, one of the more subtle uses of color can be found in a show inspired by a comic book, the CW's "Smallville." Production designer James Philpott restricts the use of blue, red and yellow to environments inhabited by young Clark Kent (Tom Welling), foreshadowing his future role as Superman, whose costume bears these colors.

As the show's characters spend an increasing amount of time in Metropolis, where Clark eventually assumes his identity as the Man of Steel, expect to see more saturated blues. Just don't look for them on "Pushing Daisies," especially if the episode is directed by executive producer Barry Sonnenfeld. "He thinks that blue is so attractive to people that if it's in the same shot with someone's face, they'll look at the blue and not the actor," Wylie says. "We use a lot of green, because Barry thinks that people's skin looks really good against it."