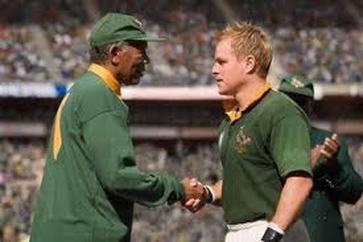 Anatomy of a Contender: 'Invictus'

"I dreaded it," the screenwriter says of his homeland's national sport, which often resembles a full-contact game of keep-away. "I'm pretty small, and I got just annihilated."

That all changed in 2006, when producer Mace Neufeld gave Peckham the proposal for John Carlin's book "Playing the Enemy: Nelson Mandela and the Game That Made a Nation." The author outlined how Mandela, newly elected as the first black president of South Africa, magnanimously put aside any bitterness he might have felt after being imprisoned for 27 years by the white minority government and used the 1995 Rugby World Cup Finals as a catalyst for reconciling post-apartheid race relations.

"Halfway through reading it, I found myself in tears," says Peckham, who immigrated to the U.S. in 1981 to study film at San Francisco State University. "I thought, 'I have to write this. This has everything.' "

But before "Invictus" could begin its journey to awards season, a key hurdle needed to be jumped: securing Morgan Freeman to play Mandela.

Freeman was an obvious choice, given his physical resemblance to Mandela and his stature. (He played God in "Bruce Almighty" and its sequel.) So Neufeld set up a meeting with Lori McCreary, CEO of Freeman's production company, Revelations Entertainment. Impressed, she asked Peckham to pitch Freeman personally.

"Morgan said, 'How soon can you start writing the script?' " Neufeld recalls.

Freeman had reason to be impatient. For several years, he had been developing a film adaptation of Mandela's autobiography "Long Road to Freedom" with producer Anant Singh, but the task of condensing the sprawling story into a two-hour movie had proved problematic.

"The book is over 700 pages long," Freeman says. "If you're going to do that, you'd have to make three movies, I think."

Additionally, an all-encompassing biopic offered little screen time for the 72-year-old actor, as he would only be able to play Mandela during the latter portion of his life. The Carlin book, on the other hand, "encapsulated the spirit of who Mandela is in pretty much a one-year period," McCreary says. "Morgan is about the same age that Mandela was at the time of the story."

Neufeld and Revelations developed the project together; then it fell to Peckham to turn his pitch into an actual script. His biggest problem was too much material. Carlin gave him access to reams of notes and research, but though the story had a natural dramatic structure, he found it surprisingly difficult to plot out the script.

He hewed closely to historical events involving Mandela and the South African national rugby team, the Springboks, focusing on the months leading up to its climactic World Cup Championship match against the New Zealand All Blacks in Johannesburg. But he also inserted several supporting characters for dramatic effect: For instance, he created the character of Sipo, a boy in the township slums who shifts from a Springboks hater to a fan over the course of the film, illustrating how black South Africans went from viewing the nearly all-white team as symbols of the oppressor to national heroes. He also added the parents of Springboks captain Francois Pienaar to serve as a Greek chorus of the typical white South African attitudes of the time.

The first draft of the script was completed in early 2007. After a round of notes from Freeman, McCreary and Neufeld and a quick revision by Peckham, it was ready to go out to directors. Freeman suggested sending it to Clint Eastwood, with whom he had worked on 2004's "Million Dollar Baby," which earned Freeman an Oscar for best supporting actor.

"I was just entranced," Eastwood says. "They were on the verge of civil war; with the slightest bit if encouragement, (Mandela) could have pulled the trigger. It took a very creative person to come to grips with this. And it shows how creative even a politician could be."

Nearly two months passed before Eastwood called Neufeld to tell him he liked the script but wanted to read it again. Finally, in September 2007, Eastwood set up a dinner meeting at Locanda Veneta in West Hollywood to discuss the project with Neufeld, Freeman and McCreary.

"Frankly, I thought this was just going to be a polite pass," Neufeld says. "Then Clint started talking about not whether he was going to do the movie, but how he was going to shoot it and when we would shoot it and what the budget might be. He had already given the script to (Warner Bros. president and COO) Alan Horn, and he said he'd probably hear from him in a day or so."

Given Eastwood's decades-long relationship with Warners and reputation for bringing in productions under budget, it was no surprise the film got a quick green light with a budget in the $60 million range.

But the production soon was hit by a series of delays. First, Freeman wanted to work with director Mike Nichols on a Broadway revival of Clifford Odets' "The Country Girl" in spring 2008. Then Matt Damon expressed interest in playing Pienaar, but his wife was pregnant and he wanted to spend time at home with the baby.

The film nearly was derailed altogether when Freeman was injured in a serious car accident in August 2008. But it was determined that he would recover in time for the scheduled March start date.

Once cameras finally began rolling on the film (then known as "The Human Factor") in Cape Town, things went smoothly, in typical Eastwood fashion.

"He finished a week ahead of schedule, and we worked civilized hours," Neufeld says. "Normally, it was a 10 o'clock crew call and around a five o'clock wrap, which is less than I work every day. No shooting into the night and all that stuff."

Freeman, who typically eschews accents, says he worked hard to nail the inflection and cadence of Mandela's distinct voice. He also had an advantage: The actor and leader have been friends for years, so Freeman spent time with Mandela, who gave his blessing to the film.

"People say, 'How did (Eastwood) get such a performance out of such and such actor?' " Freeman says. "He didn't get a performance; he allowed it. He steps back. He moves quickly, decisively, and he doesn't micromanage your performance. He's my favorite director for those reasons."

Eastwood also met Mandela once he arrived in Cape Town.

"It was a pleasant meeting," Eastwood says. "I wasn't prying for any particular information because I had all the knowledge I needed."

South African workers made up 80% of the film's crew, and tax incentives shaved $5 million from the budget. But the country was not always film-friendly.

"The most challenging thing was just getting past this mindset that bending the rules for filmmakers wasn't allowed," says Rob Lorenz, who produced the film with Eastwood, McCreary and Neufeld. "Permission to shoot at the presidential offices was granted and rescinded no less than four times, but we persisted, and I think we were the first company in 25 years that shot there."

Although Peckham returns to South Africa every few years to visit family, he was not able to be on hand for the shoot. In fact, he didn't have much interaction with Eastwood at all.

"People ask me all the time, 'What's it like to work with Clint Eastwood?' and I say, 'I have no idea,' " Peckham says. "I tried to talk him in to some little changes on my own script, and he said, 'Those sound like good ideas. I'll get back to you.' I'm still waiting. He shot what I wrote. My job was done, and he went and did his."