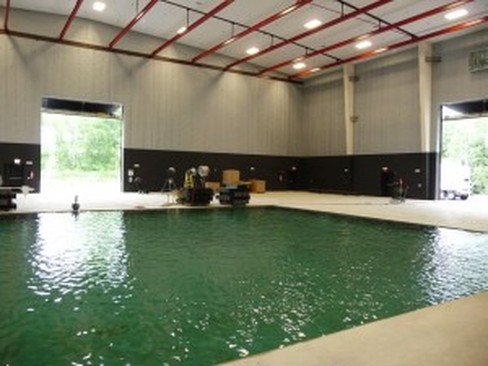 The special effects tank in Stage 10 of EUE/Screen Gems Studios in Wilmington, NC.
Made in North Carolina

The Hollywood Reporter
By Todd Longwell

Chris Cooney had to make a move.

After a busy 2007, during which the nine EUE/Screen Gems soundstages in Wilmington, N.C., buzzed with up to 700 people a day working on such films as “Nights in Rodanthe” and “The Secret Life of Bees” and the CW series “One Tree Hill,” Cooney, president and COO of EUE/Screen Gems, had decided to go forward with plans to build a 10th soundstage dubbed Dream Stage 10, a $15 million state-of-the-art facility featuring 37,500 square feet of column-free space, along with a 10.5-foot-deep, 186,000-gallon water tank.

Then, in May, Georgia upped its the limit on its film and TV tax credit to 30%, besting North Carolina’s 15% tax credit. Building soundstages is always a gamble, and with the flow of productions and crew suddenly shifting south, the odds had taken a decided turn for the worse. When it came time to give the final go-ahead, Cooney hesitated.

“The price of steel kept going up and, finally, one day (Cooney) said, ‘Let’s do it,’ ” recalls Bill Vassar, EUE/Screen Gems Studios executive vp. “Then the price of things started to come down, so we were able to renegotiate with most of the vendors and it came out to be beneficial for everyone, including the contractors who were very grateful to have work.”

Construction began in September and Dream Stage 10 — the third-largest film and television production stage in the country — opened for business last month.

“This gives us the facility to recruit productions we wouldn’t have been able to recruit before, including water-based pictures, and get our name out in a bigger, better way,” Wilmington Regional Film director Johnny Griffin says.

It would be nice to declare it a happy ending and roll the credits, but it’s not a simple case of if you build it, they will come to North Carolina.

First of all, there’s still the issue of the incentive.

Producer Jonah Hirsch says if it hadn’t been for the fact that his new film “Main Street,” starring Orlando Bloom, was a set in Durham, N.C., it’s unlikely he would’ve brought the production to the state. “Fifteen (percent) wouldn’t have been enough to attract us,” Hirsch says. “There are just more competitive deals out there.”

The point was driven home in April when Gov. Beverly Purdue scheduled a news conference to announce that the new Disney film feature “The Last Song,” starring Miley Cyrus, would be shooting in Wilmington, then canceled it the very same day when it was learned that the film was going to shoot in Georgia instead.

On June 24, the North Carolina State Senate passed a bill that would up the tax credit to 25%, but it has been languishing in the House while lawmakers struggle to come to terms on the state’s budget.

But even if North Carolina does raise the credit to 25%, it’s still marginally less than what Georgia offers and it positively pales in comparison to the 42% available in Michigan, where there are plans to build a $146 million production complex named Unity Studios outside of Detroit opening in October. But, as North Carolina boosters like to point out, unlike Dream Stage 10, Unity is being built from scratch in a state that barely had a trickle of Hollywood business until its incentives went into effect last year.

“The people who run (EUE/Screen Gems) have been doing it with nine other soundstages for 25 years,” Griffin says. The studio has hosted more than 300 films, as well as TV series like “Dawson’s Creek,” so “they don’t have to explain how they got into this business and what they know about this business and why they should be trusted.”

The same could be said of the state of North Carolina as a whole. It boasts a an experienced crew base as well as six film regional film offices in addition to its state film commission.

“The state is very film savvy,” says costumer Dawn Williams, a North Carolina native who returned to the state from New York in 1991 to work on the film “Billy Bathgate” and never left. “Films have shot all over the state of North Carolina. Almost every little town you can imagine has had a film. And it’s very easy to shoot here. Sometimes you go to a state that’s not used to production and all of a sudden there are a lot of rules that limit where you can film. We basically don’t have that here. We don’t even charge for your permits.”

The state was barely a blip on Hollywood’s radar until producer Dino De Laurentiis brought his big-screen adaptation of the Stephen King novel “Firestarter” in Wilmington in 1984. The minimogul fell in love with the area and its cinematic possibilities and decided to make it the home for his new DEG Studios, which became the largest soundstage complex east of California. The studio was sold to Carolco in 1990 and then to Screen Gems in 1996.

By the early 1990s, North Carolina had become the No. 3 production center in the U.S., behind California and New York, with a steady stream of productions flowing into the state — including such high-profile features as “The Color Purple,” “Dirty Dancing, “Bull Durham,” “The Last of the Mohicans” and “The Fugitive” and numerous movies of the week. They were drawn by the studio facilities and the relatively inexpensive (it’s a right to work state) crew, as well as the mild weather and a diverse topography capable of standing in for the Northeast, the Deep South, the Midwest and the West Coast.

But almost as quickly as the state came charging on to the scene, it began to fade as Canada lured away productions with increasingly generous subsidies and the big networks virtually abandoned the movie of the week. Production revenue fell from a high of $504 million in 1993 to $230.8 million in 2002.

When the tax credit was raised to 15% in 2007, production spending in North Carolina shot up 60%. Then Georgia and Michigan passed new incentives, along with South Carolina, Connecticut and Massachusetts, and the state was back on the ropes again.

“They all just leapfrogged us and we just saw our market share dissipate,” says Aaron Syrett, director of the North Carolina Film Office. “The thing about North Carolina is we’ve always had an infrastructure here that people can call on. Now with those more competitive incentives around, we’re seeing our crew base leave and follow those jobs. I’m sure they want to be home, but they have to make a living.”

So far, Williams has been able to earn her keep in North Carolina. In recent months, she’s worked on five indie features in Wilmington, including the recently wrapped “Provinces of the Night,” starring Val Kilmer, Kris Kristofferson and Hillary Duff, as well as the HBO series “Eastbound & Down.”

However, Williams admits, “depending on what happens, I could be headed to Georgia, too. But I’m sticking it out for now and seeing what happens here.”