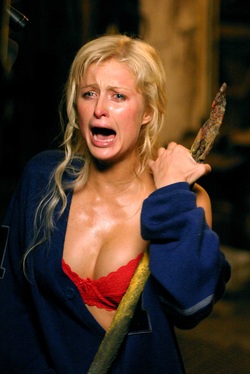 Does Paris Hilton not know everyone is making fun of her? Or does she just not care? Maybe a little of both, especially after "House of Wax" producer Joel Silver printed up "See Paris Die" T-shirts.

If that's the case, Paris will have plenty to chuckle over in "Wax." There's even a scene shot in greenish night-vision, just like the most memorable scenes in her notorious sex tape, "One Night in Paris."

Director Jaume Serra insists that Paris was in on the joke - "she's a cool girl," he says - but the reality is a little more complicated.

Did you know the night vision scene was alluding to the sex tape?

I didn't see the movie until two days ago. I didn't even know they were doing that, but, whatever. I didn't mind.

Do you think people are mean to you?

Yeah. But, whatever. I don't mind.

Why is everyone so mean?

I don't know. I'm easy to do it to, I guess. But whatever. I'm a businesswoman. I'm not doing anything bad.

Last night at the "House of Wax" screening people applauded when you got killed.

Because it's such a cool scene. They're applauding because they love it.

You don't think people resent you?

Well, maybe someone's trying to be cool, and like, "Ooh, look. I'm cool. I'm clapping." But, whatever.

Some people think of you as an heiress who had everything handed to her.

If people knew how hard I work, they wouldn't say that. I work my butt off.

I get up at, like, 6 a.m., and I'm on conference calls or on my way to a photo shoot or shooting a film or in the studio or at a meeting. It's always something. It's never free.

Your next career move is releasing an album, right? When do you write your songs?

I carry around a recorder. It's in the car. If I'm upset of happy or I'm thinking something, I'll say it into the recorder, and then I'll go work with my producers and my writers and come up with songs.

You say you want to retire from all this. Or at least cut back and have kids.

And you say you don't go out anymore.

Not really. My boyfriend likes to stay at home. He hates going out.

So, you're dating a guy who's also named Paris. Paris Letsis.

How do you tell each other apart?

He calls me "Gorgeous" or "Princess." I call him "Babaluna."

What are you going to name your first child?