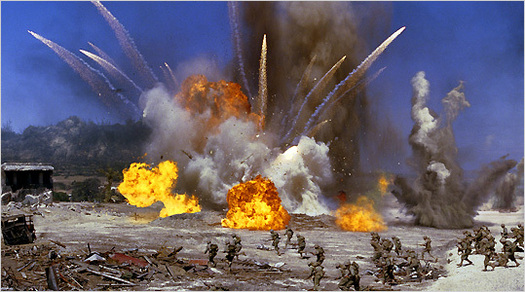 Prosthetics Blown of of Amputees for 'The Pacific'

From the creation of bloody WWII wounds to the stunt coordination of a brawl in a moving car, crafts people talk about their Emmy-nominated work.

From the flying gore of exploding wounds to the room-shaking whistle and boom of 75mm shells, HBO's "The Pacific" is probably the most graphic depiction of the horrors of war to hit the small screen, outdoing even 2001's "Band of Brothers," the cable channel's previous World War II miniseries from executive producers Tom Hanks, Steven Spielberg and Gary Goetzman.

"When I first started speaking to the producer, Tony To, he said he didn't want to hold back anywhere; he wanted it to look exactly like it looked for real," says Jason Baird, director of Australian-based JMB FX Studios, which shared the prosthetic makeup effects load on the mini with American company KNB EFX. "We got mountains of photographic reference from the battles there as well as all those horrific war images from Afghanistan and Iraq. There's so much of that uncensored carnage online, so we used a lot of that to reference the blast damage."

And all that carnage was not created in a vacuum.

"The collaboration between hair, makeup, costume, visual effects and special effects is vital, particularly on a war picture," says costume designer Penny Rose, whose team created 3,000 uniforms for the mini. "We literally operate as onebody. I don't slash a uniform until I've seen the wound."

For the makeup team that created the wounds, the tone was set early while shooting the 10-part mini-series on Australia's Queensland coast in 2007, when they were called to fabricate a Marine patrol that had been tortured and killed by the Japanese.

"We just bloodied them up, soaked them in sweat and made them completely filthy," Baird says. "Once (the producers) saw it, they said, 'That's how everyone needs to look.' "

In the scene, one soldier had been beheaded, the other had his genitalia cut off and shoved in his mouth -- though the latter might've been hard for viewers to make out on-screen.

"We would have it all there as it would really be, then the camera would pass across everything," Baird says, "so even if you didn't get a really good look at it, you'd get the idea that it was all pretty grotesque."

Baird recruited amputees who were outfitted with prosthetics that could be blown off by gunfire and explosions. In some instances, the makeup department applied wounds to actors that were covered up via CGI by senior visual effects supervisor John E. Sullivan and his team in post, then revealed after they were hit by digital bullets or shrapnel.

In fact, many of the instruments of war (including planes flying overhead and fleets of ship) and their devastating effects were not added until the final stages of postproduction.

"Every time a new visual effects pass was put in, there were 50-100 shots that had to be dealt with," says re-recording mixer Mike Minkler. "Mostly it was new material or you'd have an airplane going left to right instead of right to left."

In "The Pacific," the Japanese are often an unseen enemy, lurking in the dark, which placed a greater burden on the mix to create suspense.

"You put the gunfire being behind them, getting closer, forcing them to move into a certain direction or forcing them to fall back," Minkler explains. "That's the storytelling part of the soundtrack."

But for Minkler the biggest challenge was dealing with the sheer quantity of sounds.

"The producers wanted a theatrical, take-it-to-the-limit type of soundtrack," Minkler says, "so very early they hired on a sound editing team (led by supervising sound editor Tom Bellfort) that recorded and created gunfire, explosions andall the stuff that goes along with the warfare in tremendous numbers andvariety. When it came to do the mix, it was almost overwhelming."

When stunt coordinator Dean Choe first got the script for the episode "Race," it was just a simple fight between three guys in the front seat of a car. Eight days later, it had been turned into a mad brawl in a vehicle careening through downtown Vancouver (standing in for San Francisco) with the hero hanging halfway out the driver's side door, battling a baddie inches above the passing asphalt, while Laura Lee Connery (stunt double for Kristin Lehman) leaned over from the backseat, steering the car.

"There wasn't enough time to do some of the things you normally like to do, replumbing the pedals to a more convenient area," says Choe, who was able to pull off the location work on the gag in a day and half, while another day was spent in studio for interior shots of the car. "So we had this poor guy (stunt driver Gerald Paetz) squished underneath the dashboard with one foot on the brake and one on the gas and (Connery) steering saying, 'Get off the gas! Brake, brake, brake!' " 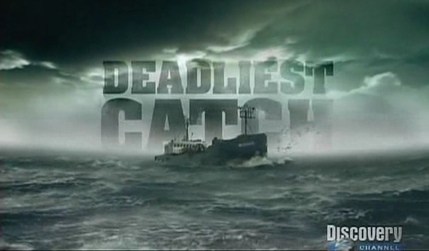 For the cinematographers sailing the Bering Sea with the crab fishermen on "Deadliest Catch," there's no calling a wrap at the end of the day. Each season, the two-man camera crews are embedded with the five featured ships 24-7 for two 10- to 14-day tours, one during the king crab season in the fall and one for the opilio crab season in the winter.

"I treat it as an expedition," says producer-cameraman Todd Stanley, who has been teamed with his brother Doug on the ship Cornelia Marie for the entire six-season run. "You've got to think about safety and your lives first and making television second."

Bone-chilling cold, stormy seas, icy decks and swinging crab traps (known as "pots") are ever-present threats to man and equipment alike. ("We go out with something like 30 cameras and we come back with half or less in working condition," Stanley says.) But the most harrowing event for Stanley this season was when Capt. Phil Harris suffered a stroke on ship on Jan. 29.

"I watched my buddy get taken off on a stretcher ... and I was beside myself because I didn't know if I'd ever see him again," Stanley says. But Harris insisted that Stanley come to Anchorage and continue covering the story from the hospital, where Harris died Feb. 9. "I feel so incredibly lucky that I got to spend those last days with him." 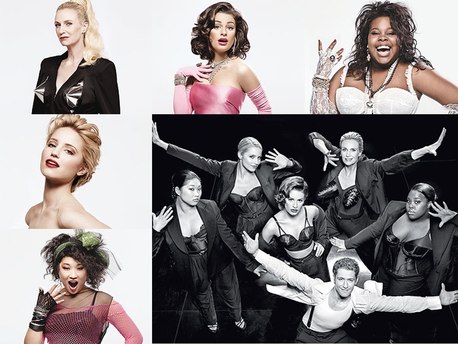 When "Glee" creator Ryan Murphy decided the next assignment for his William McKinley High students would be the works of Madonna, he threw down the gauntlet to costume designer Lou Eyrich with a script featuring five costumed dance numbers paying tribute to the Material Girl, as well as scenes that called for her to dress a cheerleading squad, a marching band and an entire high school basketball game.

"Once the budgets were approved and such, I think I had five days to put it all together," says Eyrich, who is Emmy nominated for the episode along with the show's makeup and hair teams. "Everybody had 11-14 changes. I was also working on another episode at the same time ('Hell-O')."

Her biggest challenge was a re-creation of Madonna's "Vogue" video starring Jane Lynch (coach Sue Sylvester), featuring a gaggle of Madonna look-alikes representing eight of the singer's iconic video looks, including "Like a Virgin," "Material Girl" and "Borderline."

"We ran all over town between Hollywood Boulevard and a couple of costume houses and just loaded up on rosaries, crinolines, '80s boots and little bowler hats," Eyrich says. "Then they sent a bunch of Madonna look-alikes to us and we had about four hours to put it all together and re-create the looks." 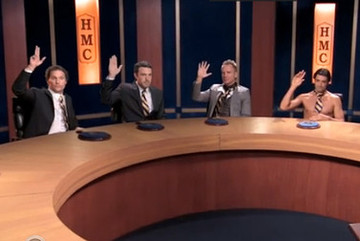 How did Jimmy Kimmel manage to gather the world's most famous hunks (including Matt Damon, Ted Danson, Patrick Dempsey, Ethan Hawke, Rob Lowe and Lenny Kravitz) together in the same room to film a skit for his Oscar special? He didn't.

"It was shot over a couple of weeks," explains editor Brian Marsh. "First, director Andy Fisher did a table read with stand-ins in the actors positions and then we shot Jimmy doing all of his lines looking where each individual would be sitting. That provided the structure. Then each time an actor came in, we could just sit them in the seat and give them Jimmy's eye line."

As each actor shot his part, Marsh would insert his performance in place of the stand-in's. To reinforce the illusion of togetherness, he made sure to include group shots of the few actors they were able to shoot at the same time (e.g. Taye Diggs, Tony Romo and John Krasinski). In another instance they shot Ben Affleck, Matthew McConaughey, Sting, Gilles Marini and Josh Hartnett individually against green screens and put them together around the table in post.

Above all, Marsh had to pay attention to the comic timing.

"The fun of the piece was seeing who was around the room," Marsh says, "so I had to keep track of who had already been seen, because you want to save those reveals for their lines and get the laugh." 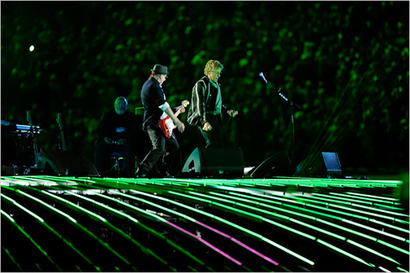 Production designer Bruce Rodgers wanted the stage to be "epic and iconic" in a manner befitting the legendary British rockers and their songs, as well as the occasion, the biggest annual sporting event in the U.S. So he and his team (which included fellow nominees Sean Dougall and Mai Sakai) designed a 140-foot circular stage, modeled on Captain America's shield, and outfitted it with array of pyro, smoke machines, lights and lasers, along with 3055 Barco MiSTRIP modular LED displays that flashed in time with the songs' burbling sequenced synthesizers, spelled out the band's name and formed giant windmilling silhouettes of guitarist Pete Townshend.

Then came the real challenge: Making it fit through a single tunnel in Miami's Sun-Life Stadium that is 18 feet by 19 feet at its narrowest point. The solution was to build the sloping outer portion of the shield as 26 radial pieces that attached to a circular 40-foot stage at the center, made of 14 pieces. As the final second in the game's first half expired, 40 union stagehands and 600 volunteers had seven and a half minutes to wheel the 40 pieces on to the field and make the 360 connections for lighting, pyro, lasers, audio and video, knowing that any mistakes would be witnessed by 150 million viewers in 230 countries around the globe. Following the Who's 12-minute set, they then had six minutes to disassemble the stage and clear the field.

The crew rehearsed the assembly 12 days in a row leading up to the game.

"In about 14 rehearsals, the only time it worked was the 14th time," says Rodgers, who also designed the stages for Super Bowl performances by Prince, Tom Petty and Bruce Springsteen. Fortunately, it also worked on game night, even if it did leave Rodgers a little shell-shocked. "It was just madness," he says, "like the opening of 'Saving Private Ryan.'"