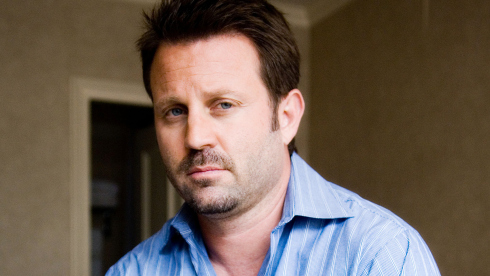 Waugh with Dwayne Johnson on the set of "Snitch."
There are faint scars on the face of Ric Roman Waugh that testify to the injuries he suffered during his years as a stuntman on films such as “Days of Thunder,” “True Romance,” “Hook” and “Lethal Weapon 2.”

But Waugh, son of the late Fred Waugh, a founding member of Stunts Unlimited, is more concerned with prison these days — specifically the unforgiving criminal justice system he depicts in his new film “Snitch,” which opened Feb. 22 via Summit Entertainment.

“You’re not a criminal; you follow the rules of society, and then you make that one mistake … ,” Waugh says.

On one level, “Snitch” is an action film, replete with gun battles, car crashes and moments of suspense. But the story it tells (based on a 1999 episode of PBS’ “Frontline”), about a truck company owner (Dwayne Johnson) who strikes a deal with a federal prosecutor (Susan Sarandon) to go undercover and infiltrate a drug cartel in hopes of earning freedom for his son, who’s facing a 10-year prison sentence after being set up in a drug sting, is also designed to shine a light on the unfairness of mandatory drug-sentencing laws.

“What I want to try to do is take you into a world of controversy, but not hit you over the head with it,” says Waugh, between bites of an egg white and chorizo omelet at a restaurant in his hometown of Agua Dulce, 40 miles north of Hollywood, where he grew up surrounded by fellow second-generation stuntmen. “I just want to put you down on the 50 yard line and let you form your own opinion.”

Today, the filmmaker lives in Austin, Texas, with his wife and their 5-year-old twin sons. He makes regular trips to Los Angeles to tend to a growing development slate that includes the sci-fi thriller “Tipping Point” for Relativity Media and the fact-based oil rig disaster movie “Deepwater Horizon” for Participant Media, producers of “Snitch,” and a production company noted for socially relevent films.

When Waugh decided to transition from stunt work, he started with the straight-action genre, writing and directing “In the Shadows” (2001), a thriller about a hit man (Matthew Modine) sent to kill a Hollywood stunt coordinator (James Caan). He followed that up by churning out a succession of action-heavy scripts for big name producers such as Jerry Bruckheimer, Neal Moritz and Mark Gordon.

But, after a few years, he began to feel that action alone was not enough.

“There was something that was not burning in my gut anymore with those kind of movies,” says Waugh, the older brother of fellow stuntman-turned-director Scott Waugh (“Act of Valor”). He decided that, from that point forward, if he were to commit to a project, “there had to some type of social relevance.”

His first step in that direction was low-budget feature “Felon” (2008), which focused on the brutalities faced by a family man (Stephen Dorff) sent to prison for killing an intruder. To research the film, which also stars Val Kilmer, Waugh spent two years working undercover as a deputy parole officer, speaking with guards and inmates at maximum security California prisons in Corcoran, Tehachapi and Pelican Bay.

Waugh’s present film is “Currency,” about a Special Forces veteran struggling to reintegrate with society who gets involved in a sophisticated counterfeiting operation. Participant is again producing.

“It’s a big, entertaining action-thriller that has something to say,” Waugh says. “So I’m getting my cake and eating it.”