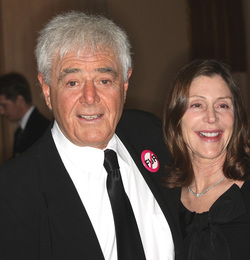 Icons: The Donners
By Todd Longwell

Producer Lauren Shuler Donner was in a tough spot earlier this year. She had three films in various stages of production in the U.S. (Universal’s “Cirque du Freak,” DreamWorks/Paramount’s “Hotel for Dogs” and Fox Searchlight’s “The Secret Life of Bees”) and one shooting in Australia that desperately needed some personal attention (Fox’s “X-Men Origins: Wolverine”).

As much pride as she had in her abilities, she knew she couldn’t be on opposite sides of the earth at once. So she did what was, for her, unusual: She turned to her husband, Richard Donner, the veteran director-producer, whose credits include such blockbusters as 1978’s “Superman” and the “Lethal Weapon” series.

“For the first time ever, I went to him and I said, ‘Could you please help me?’” Shuler Donner says. “And he came down, and he helped produce ‘Wolverine’ for me in Sydney, Australia, while I went to New Orleans on ‘Cirque du Freak.’”

As the saying goes, no good deed goes unpunished. Before long, Internet wags were speculating that Donner was waiting in the wings to replace “Wolverine” director Gavin Hood.

“I was there to do nothing but help Gavin anyway I could, as a producer and never as a director,” Donner insists. “That was my deal with Lauren. I would never step on another director, and I didn’t go until Gavin asked me to come over and help him. He called me in L.A. and I said, ‘Hey, pal, I’m on my way.’ He’s a good buddy of mine right now.”

Donner and his wife are good buddies, too — away from work. But their professional efforts for their production entity, the Donners’ Co., are a lot like the stars they’ll be receiving Thursday on the Hollywood Walk of Fame — side by side, separate but equal.

“We like our marriage better than the business,” Donner explains. “We collaborate on other (things). But when you’re talking about screenplays, projects and things like that, we just cannot work together, because she won’t listen to me!” he says in mock outrage. “Lauren’s great attributes are working with directors, and she’s wonderful with them and gets along and everything. And I’m just like a real loner. Rather than hurt our relationship, it’s better we don’t work together.”

According to Twentieth Century Fox co-president of production Alex Young, another thing that sets Shuler Donner apart is her ability to handle all aspects of production, from development, casting and shooting all the way through to the marketing of the finished product.

“She does it all, and she does it with full gusto,” Young says. “On an ‘X-Men’ movie, she’ll be there till all hours of the night with all of us on the script, but she’ll also be there until all hours of the night with casting, with the costumes, working with the filmmakers and helping them with any questions they might have, and (acting like a) real adult in the process.”

Donner is known for his unique ability to handle it all when it comes to genres, from horror (1976’s “The Omen”) to juvenile adventure (1985’s “The Goonies”). He’s also renowned for his wicked sense of humor.

“Dick kind of reminds me of an Aussie,” says Hugh Jackman, who was a virtual unknown in the U.S. when Shuler Donner championed him for the role of Wolverine in the first “X-Men” (2000). “He’s just a nonstop practical joker. He rings me sometimes pretending to be other people, pretending to be Mel (Gibson). He’s an example of what we’d call in this country a ‘stirrer,’ in the best sense of the word. He loves life.”

Donner and his wife like to share the love with both people — “The best thing you can do is get invited to a party at the Donners’ house,” Jackman says — and dogs. “Wherever they are, (stray) dogs find them. At one point, they had 17 dogs,” he adds.

Despite their preference for working apart, they’re also there for each other on a daily basis, professionally speaking, providing advice and counsel when needed.

“Lauren keeps me in touch with where I’ve gone astray (artistically) because I may lose that insight into a relationship or a romance or something because my male, macho loudmouth takes me in a direction that may skip right over it,” Donner says.

Similarly, Donner has provided his wife with insight into the masculine.

“If I hadn’t seen how he did action movies, I wouldn’t have had the wherewithal to even pursue an ‘X-Men’ or a ‘Constantine,’ or any of those,” Shuler Donner says.

Away from the demands of warring mutants, Shuler Donner still finds time to explore the feminine in films, like her adaptation of Su Monk Kidd’s coming-of-age novel “The Secret Life of Bees,” opening tomorrow. She’s also busy prepping the January release of “Hotel for Dogs,” while ushering “Wolverine” through postproduction.

At 78, Donner is showing no signs of slowing down either. “He has more energy than a 20-year-old,” Shuler Donner says. He’s currently shopping one script by Brian Helgeland with him attached as director, and completing another with Richard Wenk (2006’s “16 Blocks”) about a group of orphan children who save a baby elephant, which he describes as “‘Goonies’ meets ‘Free Willy,’ but with a greater sense of reality.”

Collectively, the Donners say they could work as a producing team again in the future, but what they really want to collaborate on is a screenplay.

“We have one good idea we’d like to try, and maybe we’ll just sit down one of these days and throw things at each other,” he jokes.

Don’t they know that if anything can break them apart, it’s the terror of a blank page?

Mid-1950s
Aspiring actor Richard Donner takes a job with a small production company and winds up directing documentaries and commercials.

Mid-1960s
Donner becomes a top TV director, helming everything from "The Fugitive" to "Gilligan's Island."

1973
Lauren Shuler shifts gears from being assistant editor of educational and medical films to a camera operator, working on rock concert shoots, sitcoms and TV movies.

1976
Donner breaks through as a feature director with the horror hit "The Omen."

1978
Donner directs "Superman." Shuler earns an associate producer credit on Motown Prods.' "Thank God It's Friday," after joining the company as a story editor and rising to director of creative affairs.

Oct. 16, 2008
The Donners receive stars on the Hollywood Walk of Fame.