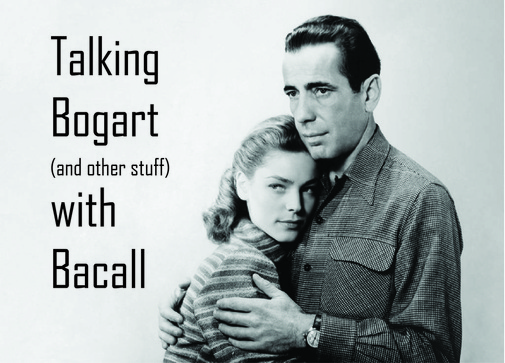 Lauren Bacall seemed... how shall I say it? A little loose. It was the fall of 2000, noon-ish for me in Los Angeles and sometime after lunch for her in New York. I had called to interview her about her early years in show business for The Hollywood Reporter's 70th anniversary issue. She had always seemed a bit prickly to me, so I was surprised to find how friendly and open she was, especially when it came to the subject of first husband Humphrey Bogart. It shouldn't have surprised me since she explored their relationship in depth in several books. But surprised I was.

Unfortunately, a few days later, I got a glimpse of her prickly side. My editors decided to give our subjects approval of the copy because the interviews were being presented as first-person narratives. Through an assistant, Bacall insisted that a certain change be made to her specifications. I pointed out that it would render the passage incomprehensible, not to mention grammatically incorrect, but Ms. Bacall would not back down. My editor told to me to just thank her for her time. He would leave the passage as it was, and if she wanted to yell at somebody after the magazine went to print, he'd take the call. The call never came, but I always cite this incident whenever an interview subject requests to approve copy before publication. The logical response from the interviewee is, "I'm only going to ask for changes that make sense." But if we don't accept changes from Ms. Bacall, why would we accept them from the likes of you? 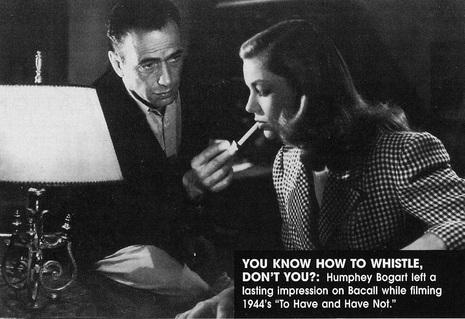 "What’s going on now, Bogie would be rolling in his grave. The kind of money that’s being thrown around… it’s obscene.

"In addition to being an incredible personality, he was a wonderful actor. He never got the kind of money that makes you rich, I can tell you that, but he’s lasted longer than anybody. He just wanted to do the work. He was trained in the theater, and most of the best of Hollywood was trained in the theater – Spencer Tracy, Jimmy Cagney, Jimmy Stewart, Hank Fonda… even Gable. And they were the big talents. Bogie spent years on stage. I don’t think he was satisfied with his movie work at the beginning, but he always tried to make it good, whatever it was. And, finally, he was recognized as having a very large talent and given wonderful stuff. He and [John] Huston.

"Bogie was a great leveler, a great teacher. He always told me what was and wasn’t important, what the town was about and the fact that the people who wrote about you in the gossip columns didn’t care anything about you. You musn’t take it seriously, you just have to think of the work. And I had a very levelheaded, hard-working mother who had exactly the same values that Bogie did, so I was very lucky. I started out with good genes and a good attitude. I never took myself seriously, but my confidence level was never very high, unfortunately. And the land that you call Hollywood does nothing to improve one’s confidence. It’s all about rejection as an actor. You want to this and you want to do that, and they say 'no.' They don’t tell you how good you are. No one does that. It’s a tough business. When it works well, it’s wonderful. When you’re appreciated, it’s double wonderful, but it’s fleeting.

"There are lot of morons out there. A lot of morons with a lot of money, and all the wrong people have it. That’s one reason I like New York, because at least there are other things. In Hollywood, the focus is so single-minded and superficial. I originally left Los Angeles because after Bogie died I wasn’t offered wonderful work, and my mother and my family were all in New York. I came back to New York, actually, to be in a play. When your life has crumbled, you need support and no one supports you like your family does.

"I had never had a starring part in a play, so I wanted to find out if I could do it. The play ["Goodbye, Charlie," 1959], unfortunately, was not well-received, but we did great business and it was a great experience for me. It was wonderful to find that I could be on the stage and that I was good on the stage. And I was appreciated on the stage in a way that I was not appreciated in the movies. I don’t think I’m terribly highly thought of as an actress in motion pictures. That’s the game. What can we do? I don’t play the game.

"I don’t think I’ve ever been tough. I think sometimes we take on some of the characteristics of the parts we’re playing temporarily. But you are what you are. You don’t live every moment of your role. Some of the younger people now say 'I’m living my part. I can’t talk now, I have to think.' So pretentious. I think my inner strength came from my mother and my family, then Bogie after.

"I have never thought of myself as anything but what I am, which is a professional actress trying to do the best work that she can. I never look in the mirror and say, 'God, your are fabulous!' People put labels on you in this country. I hate to be called a celebrity. It’s not what I want to be. Everything is boiled down to one group here, one group there. People call you what they want to call you. I’ve never been admiring of my looks. I think I’m a good actress and I think I have some talent and some originality and I know that I have humor, because I certainly would not be alive if I didn’t. Other than that, I don’t take myself so seriously. I take my work seriously. [But] it can’t be life and death. You’ve gotta have your health, because without that you’re nothing."