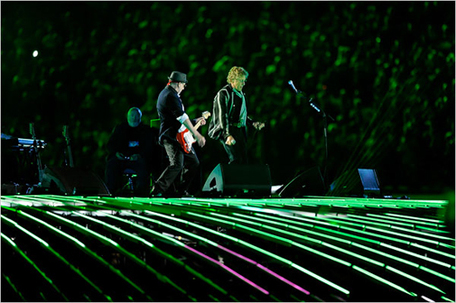 
Production designer Bruce Rodgers wanted the stage to be "epic and iconic" in a manner befitting the legendary British rockers and their songs, as well as the occasion, the biggest annual sporting event in the U.S. So he and his team (which included fellow nominees Sean Dougall and Mai Sakai) designed a 140-foot circular stage, modeled on Captain America's shield, and outfitted it with array of pyro, smoke machines, lights and lasers, along with 3055 Barco MiSTRIP modular LED displays that flashed in time with the songs' burbling sequenced synthesizers, spelled out the band's name and formed giant windmilling silhouettes of guitarist Pete Townshend.

Then came the real challenge: Making it fit through a single tunnel in Miami's Sun-Life Stadium that is 18 feet by 19 feet at its narrowest point. The solution was to build the sloping outer portion of the shield as 26 radial pieces that attached to a circular 40-foot stage at the center, made of 14 pieces. As the final second in the game's first half expired, 40 union stagehands and 600 volunteers had seven and a half minutes to wheel the 40 pieces on to the field and make the 360 connections for lighting, pyro, lasers, audio and video, knowing that any mistakes would be witnessed by 150 million viewers in 230 countries around the globe. Following the Who's 12-minute set, they then had six minutes to disassemble the stage and clear the field.

The crew rehearsed the assembly 12 days in a row leading up to the game.

"In about 14 rehearsals, the only time it worked was the 14th time," says Rodgers, who also designed the stages for Super Bowl performances by Prince, Tom Petty and Bruce Springsteen. Fortunately, it also worked on game night, even if it did leave Rodgers a little shell-shocked. "It was just madness," he says, "like the opening of 'Saving Private Ryan.'"