'True Grit':
Can The Dude Outdo The Duke?


Legend has it that when John Wayne charged across a meadow at his enemies — reins in teeth and guns a-blazing — as hard-drinking, one-eyed U.S. Marshal Reuben “Rooster” Cogburn during the iconic climax of 1969’s True Grit, he was saddled upon a moving truck, not a galloping horse. When it came time for Jeff Bridges to mount up for the same scene 41 years later in Joel and Ethan Coen’s new version of True Grit, he made the dangerous ride himself, atop a live horse.

“That was something we — and even Jeff — assumed would have to be fudged in one way or another, but he actually did all that for real,” says Joel, who co-wrote, produced and directed the $35 million film with his brother. “It was really quite difficult, manipulating those two big heavy guns with the reins in his teeth without being able to control the horse except with his legs.”

In other words, the Dude outdid the Duke. Or, as Ethan jokes, “Our Rooster could take their Rooster.”

The comparison with Wayne is not one Bridges is eager to make, but he admits it is “the elephant in the room.” Bridges and the Coens first discussed getting together for a follow-up to their 1998 cult classic The Big Lebowski at a party in the mid-2000s.

But later, when the Coens told Bridges the Western they wanted to make was True Grit, with him as Rooster, he was dubious. Hit movies are remade all the time, but Wayne is a larger-than life screen icon who still ranks among America’s favorite movie stars, 31 years after his death. And this wasn’t just any Wayne movie: It was the one that earned him his only Academy Award for best actor. But the Coens — who reteamed with No Country for Old Men
producer Scott Rudin on the project — assured Bridges they weren’t remaking the movie, per se, but going directly to the source by adapting the 1968 Charles Portis novel on which it was based.

“As soon as I read it, I saw what they were talking about because the book is wonderful, and it reads like a Coen brothers script,” Bridges says. “So I took those guys up on that and didn’t refer to John Wayne or that other movie at all and just looked at the book. Took it totally fresh like I would any other part.”

Bridges was natural for the Coens, but it wasn’t as easy finding an actress to play Mattie Ross, the fast-talking, preternaturally self-assured 14-year-old who hires Rooster to bring her father’s killer, Tom Chaney (Josh Brolin), to justice.
"The book is wonderful, and it reads like a Coen brothers script. I didn’t refer to John Wayne or that other movie at all. I took it totally fresh, like I would any other part.” — Jeff Bridges, on preparing for his role as Reuben “Rooster” Cogburn 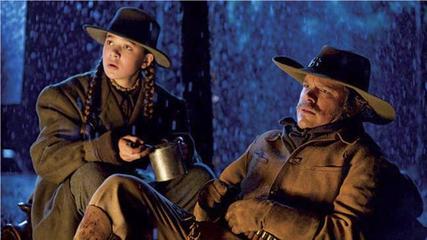 The filmmakers auditioned more than 15,000 girls via online video submissions and held open casting calls from November-December 2009 in Arkansas, Mississippi, Oklahoma, South Carolina, Tennessee and Texas (as well as the usual major cities), looking for a girl from 12 to 17 to play the character they described as “sassy, fearless and sure of herself.” The girls were asked to read the rapid-fire scene in which Mattie negotiates with horse trader Col. Stonehill (Dakin Matthews) and verbally wrestles him into submission.

“Ninety percent of the kids just get eliminated for one very obvious reason: They’re not actors in any sort of natural way,” says Joel, the elder, taller Coen. “Beyond that, the screenplay, as a reflection of the novel, is written in a very particular kind of language, so it’s almost like casting a verse player.”

A month and a half before cameras were scheduled to roll, the Coens finally decided on their Mattie: Hailee Steinfeld, a 13-year-old from Thousand Oaks, Calif., who had only a few short films and minor TV roles to her credit and who was found in Los Angeles. She won the part after reading for the Coens with Bridges, Matthews and Barry Pepper, the actor playing villain Lucky Ned Pepper.

“Just the thought of it was kind of intimidating,” Steinfeld recalls about the audition, where she was up against three other finalists. “But the minute I met [Bridges], I realized that he was just there to do a job — and I’m there for the same reason, and I kind of clicked with him and the Coen brothers.”

Co-star Matt Damon, whose vain and verbose Texas Ranger LaBoeuf joins Rooster and Mattie in their pursuit, says he was floored by Steinfeld’s talent from the first scene they shot together.

“I saw the notes they were giving her, and they were some pretty complex adjustments,” he recalls. “And we’d do the scene again, and she’d just nail it. I remember looking up at [cinematographer] Roger Deakins and saying: ‘Is she doing this stuff every day? Is she that good?’ And he just nodded to me and said, ‘She’s that good.’”

Damon says the Coens made it easier for all the actors by giving them a book with reproductions of the storyboards along with the script — part of their usual M.O. 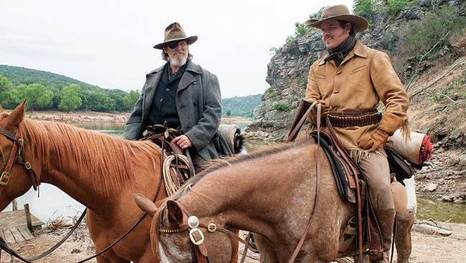 “Those are handed out to the entire crew, so you not only know the dialogue, but you can actually look at what the shot is going to be,” Damon says. “It moves the process along because the grips are pre-rigging anything that they can, knowing where the camera is going to go next. There was no place for any anxiety because they seem to have it so under control the entire time.”

One thing the Coens couldn’t control was the weather. The filmmakers scouted locations in Arkansas and Oklahoma, where the novel is set, as well as Utah, but it was determined they wouldn’t have the climate conditions required for their March-April shoot.

“We wanted a wintry look with snow, cold and no leaves on the trees,” Deakins says. “We found locations in Utah that we really liked, but then we realized it was impractical because you couldn’t really judge what kind of snow level you were going to get at that time of year and when it was going to melt.”

They decided to split filming between Texas — most of the Fort Smith scenes (as well as the interior of Stonehill’s barn, constructed on a lot that had been an auto-repair shop) were shot in Granger, just outside Austin — and New Mexico, which promised the desired weather for the bulk of the exterior filming (not to mention a 25 percent tax rebate).

They got what they came for. “It was blizzarding snow from the moment we came to New Mexico through the day we left,” Joel Coen recalls. “The problem is that it’ll snow two feet — and 12 hours later, the snow will be going. So if you’re shooting a scene that takes a number of days, there’s no way to establish continuity. We ended up just moving around a lot.”

The first day was scheduled for a location 120 miles from the production’s base in Santa Fe. But storms raged during the previous night, and when the crew arrived in the morning, their equipment was covered in two feet of snow. Digging out their gear, they loaded it into trucks and drove 150 miles to another location.

“In the morning, it felt like a complete disaster,” Deakins says. “But by the end of the day, we’d got a scene that we’d wondered how we’d have shot in heavy snow.”

Snow wasn’t the only extreme weather they faced.

“It was blazing hot, freezing cold or so windy that the sound people couldn’t pick us up,” Steinfeld recalls. “I was standing on an apple box for one scene, and the wind was so strong, I almost got blown off.” 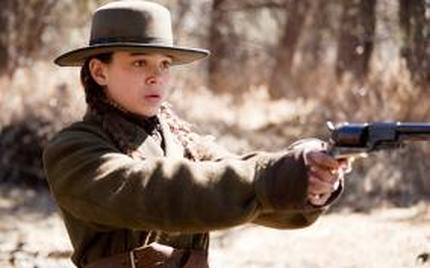 For Bridges, who had just won a best actor Oscar for Crazy Heart in March, the weather helped him get into character. “It was tough, but not so tough that it shut us down completely,” he says. “It added a great deal of grittiness and reality to the whole thing.”

The logistical strain of the weather was compounded by fact that Steinfeld is a minor. (In contrast, Kim Darby was 21 when she played the role in the original movie.) Because of childlabor laws, she only could work five hours a day — with breaks for schooling — and not past 10 p.m. The latter restriction was particularly daunting as most of
the scenes take place at night.

Fortunately, Steinfeld’s stunt double, Cassidy Vick-Hice, was such a remarkable physical match that “you could shoot her from a three-quarter angle from behind and think it was Hailee,” Damon says. “If we could get away with it, Hailee would go do school and we’d do the riding scenes with Cassidy.”

It was an important plus for the production, given that Mattie, not Rooster, is the film’s central character and in nearly every scene. The Coens have pointed to this emphasis on her perspective as an example of how their film is more faithful to original novel — which is told in first person by Mattie — than the 1969 movie. But the brothers are hardly the best authorities on the subject.

“We saw it when we were kids; I don’t remember it at all,” Ethan Coen insists. “I assume they Hollywood-ized it.”

In truth, while the films have their differences, both are remarkably faithful to Portis’ writing, re-creating key scenes with dialogue taken directly from the book.

“Most of our changes are just omissions,” Ethan says. “Even that book, as short as it is, has a lot that you won’t find in the movie.” However, on the journey to capture Chaney, “we did split off LaBoeuf from Rooster and Mattie at one point, which doesn’t happen in the book [or the 1969 film], so you can say the original is more faithful to the book in that respect.”

As for the Coens’ method for directing Bridges, it was true to the technique they employed 12 years earlier on Lebowski.

“His questions are usually limited to how much the character has smoked or drank before a particular scene,” Ethan Coen says.

Bridges disputes this recollection (“But, like they say in Lebowski, it’s just my opinion, man,” he says) but admits that keying on Rooster’s bad habits helped him unlock the rumbling, ramshackle character’s vocal center.

“Rooster smoked and drank a lot, so that would affect your voice,” Bridges says. “So I just let that go to town, and that’s the voice that popped out.”

BIG BROTHERS: How the Coen brothers’ top films performed at the domestic boxoffice